Just thought I'd signal boost this over here.

Ante Up: The Losers Fanwork Exchange returns for another year! Sign up on AO3. Need more details first? Check it out…

Read the FAQs or take a look at the fanwork size requirements. If this is your first time joining us, Ante Up is open to ALL fanworks. Yup, that’s right. You can request or create anything for this exchange, and lemme tell you, we’ve got some of the most talented, creative folks in this fandom.

So help spread the word, sign up, and take a look at the AO3 collection!

Title: Splitting to Double Down
Author:

siluria for the quick beta.

Summary: Sometimes downtime isn’t long enough to go home for a visit, so Jake makes the best of wherever they end up and takes whatever advantage he can create. If he’s lucky Cougar’s with him.

Read Splitting to Double Down @ AO3 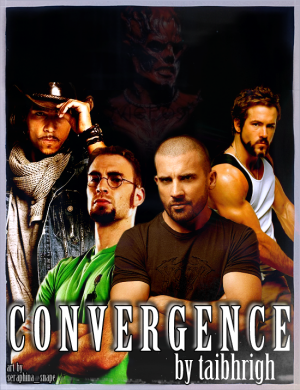 siluria for the beta. Thanks to

seraphina_snape for the the story art!
An Author's Notes About Timelines: This events in this story take places during a modified timeline of Blade Trinity movie.

Summary: The Vampire King is once again walking the earth. On any other day Hannibal King would try to kill him; today he has to thank him for saving his life. That is, before he turns it upside down.

Jake Jensen has been hiding from himself and doing a pretty good job of it. He hadn't expected to be held captive by vampires; nor had he expected to come face to face with his past. Especially not in front of Cougar.

And that's just the beginning.

Title: High Up in the Trees
Author:

writers_choice
Word Count: 2400+
Author's Notes: This is part two of Not from Around Here.
Thanks to:

siluria for the beta.

Summary: Sometimes the best ways to see things are from somewhere else. And other times it's about kissing in a tree.

Title: A Secret for a Life
Author:

writers_choice
Word Count: 2800+
Author's Notes: Before you ask, this may be the start of a series. I'm still parsing the idea. Okay, it's a series...It will be called: "Not from Around Here"
Thanks to:

siluria for the beta.

Summary: Jensen has been hiding a big secret, but to save Cougar he'll risk letting it come to light.

ante_up_losers is hosting another big bang with the same twist. This bang is not fic only. Anyone can create any large fanwork and submit it as a bang work.

That's right — any type of fanwork can be a big bang. Art, podfic, rec sets, meta, picspams, flow arts, fiber arts, and the list goes on and on.

View size requirements for the complements on Dreamwidth or join our comment party to toss out ideas, offer skills, and see what's on offer. Have questions? Contact a Mod.

Title: Why Couldn't It Be Zombies?
Author:

apocalypsebang
Word Count: 19600+
Author's Thanks: Thanks to to

siluria for the beta. Thanks to

colls for the wonderful art!
Author's Notes: This is a Losers AU. All the characters are present in some fashion or another, but some of them may not be as likeable as you hope when they are. You have been warned.

Summary: Specialist Jake Jensen is assigned a last minute mission that seemed like it was going to be a walk in the park. What he wasn't expecting was the apocalypse that started after, but who really ever expects that?

The Ante Up Losers Fanwork Exchange is returning for another year! Visit

Sign-ups are open on AO3.

ante_up_losers Dreamwidth comm. The mods created an LJ feed of the comm, so you can keep track of reminders, updates, deadlines, and other important information.
Collapse